This blog will give an introduction into secretmanagement using Hashicorp Vault I’m a software engineer at Info Support in the Netherlands. I write blogs about software development, architecture and other cool stuff.

‘Why not, the only persons that can access our code base is our team self.’

This was something that I told myself too, but keeping your secrets in configuration files doens’t only mean that they are stored in the repository. Deploying software means putting your code in a place where it can run including all the configuration files that are necesarry to run your software. So when you deploy software to a test, acceptance and production environment means three more places of where your secrets are stored.

Software that is deployed is vulnerable for hacking attempts and you can try as hard as you can, but hackers will eventually be able to access your environment and have access to all of your secrets. In this way, they immediatly have access to your database or other secured parts of your landscape.

In my opinion, a secret is everything that grants authentication or authorization for a user or application. So a secret can be somehting like a username/password, database credentials, API tokens or even TLS certificates.

If you ask me, managing secrets is hard. Managing secrets includes a few things. One of them is keeping track of who has access to which secret (Access control management). The second thing is that you should know who is using which secret (Audit trail). So in case of a security breach you can see who is responsible for the breach. The third part of secret management is to able to rotate a secret.

These management tasks come with ‘a few’ challenges. For example, one of the most obvious challenges is secret sprawl. This means that all your secrets are spread in your application landscape. A few places of which you can find your secrets is in your source code (hard coded), in configuration files and ultimately in your VCS (Version Control system like git). How do you keep track of where all your secrets are?

Hashicorp vault is, as the name says, a vault that serves as a centralized place to store your secrets. Vault uses a virtual file sytem, so every secret has its own path on which it can be accessed. All data that is stored will be encrypted. This means that data is encrypted at rest, as well as in transit.

Beside keeping your secrets safe, vault also provide an acces control layer (ACL). This means that you are able to create policies to which you can restrict the access for your secrets to who needs access. Vault operates on a secure by default standard, and as such, an empty policy grants no permissions in the system. Therefore policies must be created to govern the behavior of clients and instrument Role-based Access Control (RBAC) by specifiying access privileges (authorization).

All secrets that are used are accessed via vault, this means that vault can keep a detailed log of all requests and responses. Because every operation with vault is an request/response API, the audit log contains every authenticated interaction with vault including errors. It’s possible to enable multiple audit devices, vault will send the the audit logs to all the devices enabled. Each line in the audit log is a JSON object. There are currently two types of logs, request and response. The line contains all of the information for any given request and response. By default, all the sensitive information is first hashed before logged in the audit logs.

So, all secrets are centralized and secured in vault and are provided to applications via a request/response API. That should be enough, right? We keep track of everyone who access our secrets and they are at a centralized place. Eventhough your secrets are kept safe at rest and in transit doesn’t mean that they are forever uncompromised.

Vault is built knowing that applications usually do a terrible job in keeping secrets. Inevitably secrets will show up in a central log, diagnostic output or even external monitoring. Even though vault secures the secret and even encrypts it on the way to the application, the application isn’t trusted.

Each application that uses a dynamic secrets gets its own unique secret. There are a few benefits the come hand in hand with using unique secret per application. The first one is that if a secret get compromised, you can immediatly trace it back to the application that has caused the leak. This allows the development team to investigate and solve security breaches faster, because they know what secret was compromised and to which service this secret was served.

The second benefit that comes with using unique secrets is that it’s much easier to do secret revocation. So lets say your database password gets compromised and you need to change it immediatly. If you’re using a static database password, then you have to change your password in every application that is connecting to the database using that exact password. But how can you be sure that you changed all passwords before revoking the compromised secret? The blast radius of a static password is much bigger because you have to be sure that all applications are using the new password. Vaults unique secrets solves this problem! Each application has its own secret that can be revoked individually.

I created a demo project where vault controles the secrets that are used by an application that connects to RabbitMQ. Just follow the readme and everything should be clear!

I hear a lot of you think, ‘wow, vault is cool! maybe we can store our encryption keys in there to keep them safe!’, and that can be done by using vault easily. But like I said earlier, vault doesn’t trust its users and for that reason they don’t encourage you to do the cryptography logic yourself in your application.

The idea of not trusting the application with doing cryptography correctly evolved in developing an Encrypt as a Service functionality in Vault. This service exposes a set of high level api’s that do cryptography with the functionalities that you expect: Encrypt, decrypt, sign and verify. This api needs you to create a set of named keys, just specify the name of the key and the rest is handled by Vault. These keys will be used to encrypt your data. So as a developer tell vault to encrypt data using HMAC with some named key you created first and the peace of data.

Vault has a highly plugable architecture. This means that it has many pluggin mechanisms. Below you see a image that shows vault architecture. 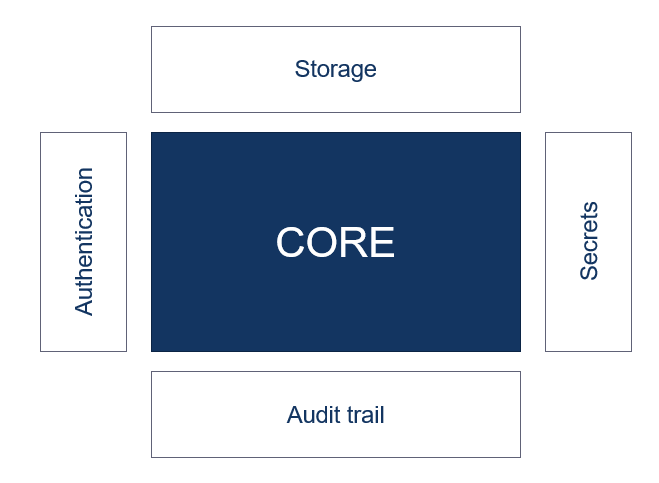 The core of the architecture is responsible for a few things like life cycle management and make sure that all request are processed correctly. Arround the core there are many extension points that allow a users to fit something in the vault environment.

The auditing backend is used to output a trail of who has done what. So this output can be written to splunk for example. It’s possible to have multiple different audit trail backends with vault. So it’s possible to send the trail to splunk, but also to a system like syslog.

The storage backend is used to provide a plugin possibilty for a storage for vault. Vault itself is stateless and will always need some type of storage to keep its data secure at rest. For example if there is a new release of vault, all data would be gone if there is no storage backend. This can be a couple of different things like a standard RDBMS, a system like Consul or a cloud managed database. The goal of the storage is to provide durable storage that is highly available.

I hope that I got you guys excited to get started with Vault. In my opinion, Vault is one of the best secret management tools that isn’t cloud native.

You May Also Enjoy

This is the first blog in a series about innovative patterns in software quality management. In this blog I will give you an introduction into testing softwa...

Wondering how you can integrate a qpid dispatch router with azure service bus? But not sure what steps you need to take? 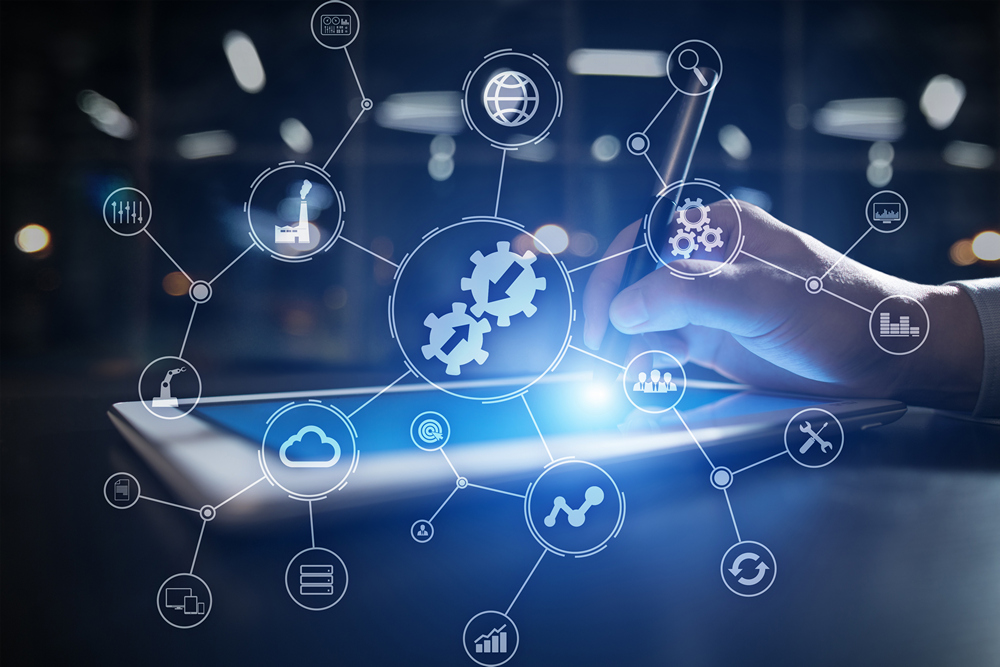 Building an integration platform based on an open standard

Enterprises are typically comprised of hundres, if not thousands, of applications that are custom built or acquired from a third party. In order to support c...